Four discourses is a concept developed by French psychoanalyst Jacques Lacan. He argued that there were four fundamental types of discourse. He defined four discourses, which he called Master, University, Hysteric and Analyst, and suggested that these relate dynamically to one another. 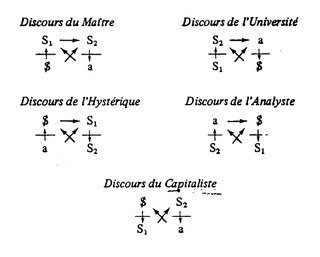 Lacan's theory of the four discourses was initially developed in 1969, perhaps in response to the events of social unrest during May 1968 in France, but also through his discovery of what he believed were deficiencies in the orthodox reading of the Oedipus Complex. The Four Discourses theory is presented in his seminar L'envers de la psychanalyse and in Radiophonie, where he starts using "discourse" as a social bond founded in intersubjectivity. He uses the term discourse to stress the transindividual nature of language: speech always implies another subject.

Slavoj Žižek: Why Todestrieb is a Philosophical Concept


Reading Žižek – Where to Start?