Not quite paintings, nor completely photographs, von Morisse’s works occupy a special intermediate place both physical and psychological, in which the absurdity of his imagination feels all the more keen for the dreamlike specificity of his rendering.

The project Pink Freud and the Pleasant Horizon stems from Andre von Morisse’s interest in the powerful influence of Freud, Darwin, and Christ on ideas about psychological, scientific and spiritual motors of human life and on popular culture since the 20th century. The exhibition at ART 3 focuses on the impact of Sigmund Freud theories on contemporary society. 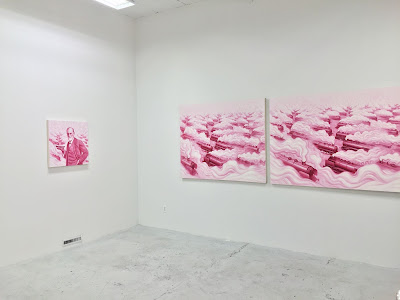 Von Morisse is particularly concerned with the moment when society ceased to treat shared
responsibilities and values as fundaments of its organization, and became atomized by bringing needs of the individual to the fore. A pivotal figure in this transition was Freud’s nephew, Edward Bernays (1891- 1995). An American born in Vienna, he became the father of public relations. Bernays combined the psychoanalytical ideas of his uncle with theories of crowd psychology to pioneer the PR industry's use of social sciences to design public persuasion campaigns. He developed techniques of manipulating public opinion while serving Woodrow Wilson during WWI and later worked for the biggest US companies. He was the one responsible for the 1920s smoking campaign targeted at women.

Born in Norway in an artistic family and educated in the US, von Morisse turns his acute insight rooted in the European tradition of intellectual irony to examination of American visual and popular culture. His imagery combines cartoon aesthetics with surrealism and pop-art, employing icons of mass culture and history of art for a playful exploration of the consumerist era.


Pink Freud and the Pleasant Horizon consists of six photographs (silver gelatin prints on paper, mounted on aluminum, 45 x 45 in.) of paintings the artist first executed in black and white (oil on canvas, 26 x 26 in.) and then photographed. This series of 12 works is accompanied by two color paintings: Pink Freud (2015) and Pink Freud in the Garden of Good and Evil (2015). An earlier version of the former was featured on the cover of Gastronomica. The Journal of Food and Culture (UC Berkeley Press, Fall 2007), and in The Food Show: The Hungry Eye at the Chelsea Art Museum in New York (2007) along works by Vik Muniz, Wayne Thiebaud, Rirkrit Tiravanija, Andy Warhol, et al.