In 1936, As Adolf Hitler Closes In, Sigmund Freud Acts To Help a Colleague’s Son Who Has Been Charged with High Treason

The Second World War, which officially began on September 1st, 1939, was being fought long before Germany invaded Poland. In Austria, it got off to a running start in September 1931, when fascists attempted a coup in a southeastern state; it failed, but it was a portent of things to come. By 1936, when Freud wrote this letter to his dear colleague Paul Federn, Austria was under a fascist dictatorship, Nazis were demonstrating in the streets, and Hitler had just signed an agreement with Austria, by whose terms Austria promised to behave more like “a German State.” Federn’s son Ernst was then 22, a committed anti-fascist, and had been arrested for the second time that year for his political opposition – which prompted Freud to insist that Federn accept his help:

I just learned that you once more have reason to fear for the nearest future of one of your sons. Although I certainly expect that light will be brought into this darkness soon, it can be guessed that the incident will cause you additional outlays in these hard times. I recall that when I recently offered you a loan of 5000, you accepted only 3000. Allow me today to send you the remainder, and do me the favor and don't mention the matter for the time being... Encl. 2000…


Ernest, who was charged with high treason, was jailed in Austria until 1937, and then sent to Buchenwald in 1938, where he remained until liberated by the Allies in 1945. He became, like his father and Freud, a psychoanalyst, in Vienna. 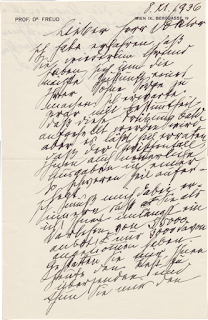 Source: In 1936, As Adolf Hitler Closes In, Sigmund Freud Acts To Help a Colleague’s Son Who Has Been Charged with High Treason (Autograph Letter Signed (“Freud”), in German, 2 pages, recto and verso, on his personal letterhead, Berggasse 19, Vienna, November 8, 1936. To Dr. Paul Federn.)

‘Why War?’: The Freud-Einstein Letters