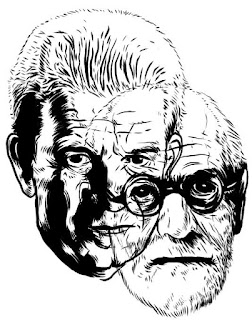 “There are five central beliefs in the theory of Freudian and Lacanian clinical practice. These beliefs are not bizarre or outlandish. Ordinary people would probably agree with most or all of them, but what follows logically from the beliefs, as Lacanian clinical technique, is neither obvious or ‘common sense’. It does not matter at this point whether you believe that any of the five beliefs are true or false, or if you are undecided. We will spend some time exploring the consequences of each, and what some of the alternatives look like.

1. A word’s meaning is not absolutely fixed but varies according to its use. Each person has had a unique ‘language history’ and use for any particular word such as ‘blue’, so the meaning that any one word or phrase has for them is often unique. But there is a special kind of exception: proper names. Proper names like ‘Fred Smith’ have very important clinical consequences because they rigidly refer to specific people and special relations between them.

2. Suffering is the human condition: life is generally conflictual and difficult, rather than harmonious and easy.

3. People often avoid the truth about themselves whenever recognizing the truth and acting on it seems likely to cause conflict and difficulty.

4. People typically both perceive and remember change, interruptions or ‘discontinuity’ much better than continuity or the lack of change. The more dramatic the change, the better it is usually remembered. Sometimes the most dramatic changes or interruptions are ‘remembered’ very well but are deeply buried in the unconscious. These memories are called ‘traumas’, from the Greek for a ‘wound’ that scars, leaving a mark, like strange writing or graffiti that might be read, but only with difficulty.

It is surprising that Lacan’s innovative clinical techniques arise almost completely from these five ordinary and simple beliefs. Freud—the main influence on Lacan—was also convinced of the truth of each of these five beliefs.”