Helene Deutsch - The First Psychoanalyst to Specialize in Women

Helene Deutsch (October 9, 1884 – March 29, 1982) was one of the most prominent female leaders in psychoanalysis. She was the first woman to lead Sigmund Freud’s Vienna Psychoanalytic Society and she contributed significantly to theory on the psychology of women that expanded the purview of Freud’s male-dominant ideas about women. 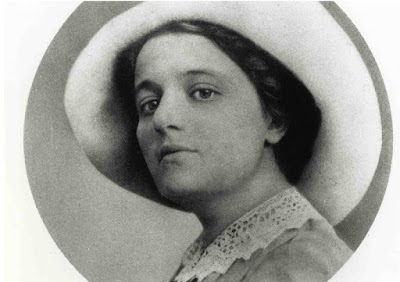 Deutsch was born on October 9, 1884, in Przemysla, Poland. Although formal education for women was not possible in late 19th century Poland, Deutsch received private tutoring which enabled her to enroll at the University of Vienna in Austria. Wanting at first to become a lawyer like her father, she considered herself a leader in female liberation. In the early 20th century, medicine was still an exceptional field for women; only seven women entered medical school at the University of Vienna when she was admitted in 1907. After reading Freud’s Interpretation of Dreams, she became interested in psychoanalysis. She was impressed by Freud’s theory of infantile sexuality and the unconscious and also his protests against society.

In April 1912, Helene married Felix Deutsch. Following the outbreak of the Great War, Helene experienced the first of many miscarriages. In The Psychology of Women, Helene discussed the concept of spontaneous abortion and miscarriage as a result of psychological factors, with a critical factor involving the 'pregnant woman's unconscious rejection of an identification with her own mother.' 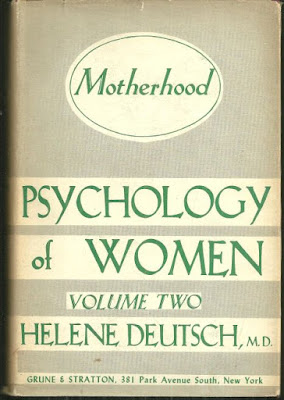 In 1919, under Freud's supervision, Helene began analyzing her first patient, Viktor Tausk, while at the same time Freud was analyzing Helene. After three months, upon Freud's request, Helene terminated Tausk's sessions. During her sessions with Freud, Helene reported 'falling in love with Freud.' She often felt herself to be Freud's daughter, claiming that Freud had inspired and released her talents. Helene claimed, however, that Freud tended to focus "too much on her identification with her father" and her affair with Lieberman. In one analysis with Freud, Helene dreamt that she had both female and male organs. Through analysis with Freud, she discovered that her personality was largely determined by her "childhood wish to be simultaneously [her] father's prettiest daughter and cleverest son."  After one year, Freud terminated Helene's analytic sessions, to instead work with the Wolf Man. Helene nevertheless was a brilliant clinician, who stood up to Freud and got away with it when she 'disagreed with him about her patients.' 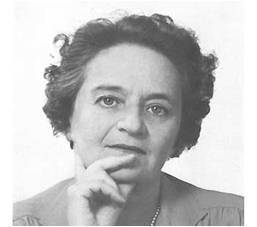 In 1935, Helene emigrated her family from Vienna to Boston, Massachusetts, where she continued to work as a psychoanalyst until her death.

'Her best known clinical concept was that of the "as if" personality, a notion that allowed her to spotlight the origin of women's particular ability to identify with others'.

“My only reason for using so unoriginal a label for the type of person I wish to present is that every attempt to understand the way of feeling and manner of life of this type forces on the observer the inescapable impression that the individual’s whole relationship to life has something about it which is lacking in genuineness and yet outwardly runs along ‘as if’ it were complete. Even the layman sooner or later inquires, after meeting such an ‘as if’ patient: what is wrong with him, or her?”

Helene Deutsche, who was to make her name with her writings on female sexuality became paradoxically something of an Aunt Sally in feminist circles...her name tarnished with the brush of a "misogynist" Freud whose servile disciple she is purported to be'. In 1925 she 'became the first psychoanalysts to publish a book on the psychology of women'; and according to Paul Roazen, the 'interest she and Karen Horney showed in this subject prompted Freud, who did not like to be left behind, to write a number of articles on women himself'. In his 1931 article on "Female Sexuality", Freud wrote approvingly of 'Helene Deutsch's latest paper, on feminine masochism and its relation to frigidity (1930), in which she also recognises the girl's phallic activity and the intensity of her attachment to her mother'. 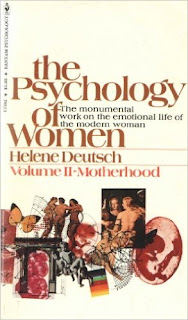 In 1944-5, Deutsche published her two-volume work, The Psychology of Women, on the 'psychological development of the female...Volume 1 deals with girlhood, puberty, and adolescence. Volume 2 deals with motherhood in a variety of aspects, including adoptive mothers, unmarried mothers, and stepmothers'. Mainstream opinion saw the first volume as 'a very sensitive book by an experienced psychoanalyst....Volume II, Motherhood, is equally valuable'. It was, however, arguably 'Deutsch's eulogy of motherhood which made her so popular...in the "back-to-the-home" 1950s and unleashed the feminist backlash against her in the next decades' — though she was also seen by the feminists as 'the reactionary apologist of female masochism, echoing a catechism which would make of woman a failed man, a devalued and penis-envying servant of the species'.

As time permits a more nuanced, post-feminist view of Freud, feminism and Deutsch, so too one can appreciate that her central book 'is replete with sensitive insight into the problems women confront at all stages of their lives'. Indeed it has been claimed of Deutsch that 'the ruling concerns of her life bear a striking resemblance to those of women who participated in the second great wave of feminism in the 1970s: early rebellion...struggle for independence and education...conflict between the demands of career and family, ambivalence over motherhood, split between sexual and maternal feminine identities'. In the same way, one may see that 'to cap the parallel, Deutsch's psychoanalytic preoccupations were with the key moments of female sexuality: menstruation, defloration, intercourse, pregnancy, infertility, childbirth, lactation, the mother-child relation, menopause...the underlying agenda of any contemporary women's magazine — an agenda which her writings helped in some measure to create' 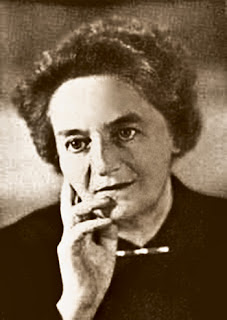 Helene Deutsch died at the age of 97 on 29 March 1982 in Cambridge, Massachusetts. Her contributions had an impact not only on the development of American psychiatry, but also on the future of women in medicine, psychology and other careers. 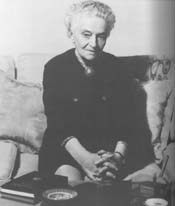 In her biography, Paul Roazen writes:


"Helene Deutsch was an independent-minded woman, who wanted to assert a viewpoint different from that of either traditional psychiatry or conventional analytic wisdom.... Her whole life meant a challenge to the prevailing standards of her society”

Lou Andreas-Salomé, One of the First Female Psychoanalysts